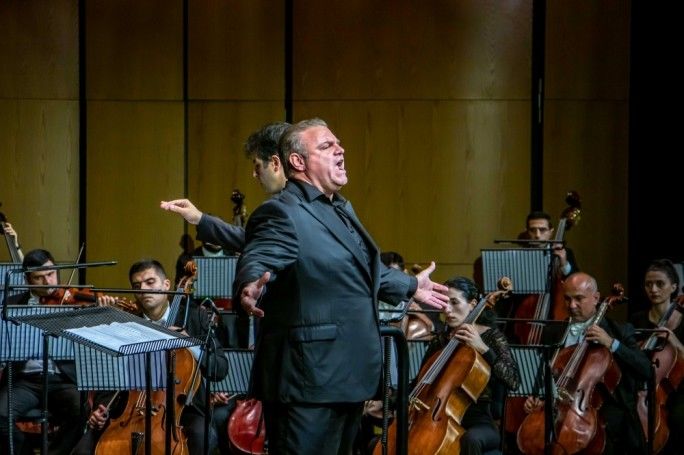 Taking place between the 17th and the 22nd of June, the Symphonic Middle East marked the EUFSC’s first foray into the Middle East, with Joseph Calleja taking pride of place as the festival’s honorary guest. Moreover, the occasion also represented a milestone for the tenor’s own career as well, with Calleja’s appearance at the illustrious Dubai Opera marking the first time that he has performed, or indeed, ever visited the United Arab Emirates city of Dubai.

Despite his brief sojourn in the city – Calleja landed a short while before the festival and departed early the day after – the famed opera singer was impressed by what Dubai had to offer, marvelling at how “an old fishing village that was nothing special has been turned into an international, multinational hub”, and acclaiming the positive atmosphere emitted by the city as it begins emerging from the throes of the coronavirus pandemic.

Calleja also touched upon the pressures that come with performing live concerts, revealing that “the more time passes, the worse it is because my reputation is always growing, and people are always expecting to hear one of the best tenors in the world perform, and the fear is not that I don’t know how to sing or what to do, but that I won’t be able to give what I know I can give to the audience”. However, he added that despite the pressure, nothing beats the joy of live performance for most artists.

Throughout his performance, which consisted of a wide variety of work from across the entire spectrum of the opera canon, Calleja was joined on stage by the ASSO, who were led by their Founder, Principal Conductor, and Artistic Director, Principal Conductor of the Malta Philharmonic Orchestra Sergey Smbatyan. In fact, it was the orchestra that opened the concert itself, with a rendition of the famous Overture of Giuseppe Verdi’s “The Force of Destiny”. This was then followed by the seminal aria-ballade “Questa o quella” from Verdi’s “Rigoletto”, after which Calleja delighted audiences with his interpretation of “E’ la solita storia del pastore” from the Opera “The Arlesiana” by Francesco Cilea.

Smbatyan and the ASSO then gave a performance of the Intermezzo from Pietro Mascagni’s “Cavalleria Rusticana”, whereupon Calleja appeared on stage once again to sing Reisvegliati, Amore from American-Maltese composer Alexey Shor’s “Crystal Palace” Suite, which marked the first time that Calleja has ever performed works by this contemporary composer, and inspired particularly raucous applause from an audience thrilled to see contemporary works being included in the concert programme.

In fact, many in the audience were full of praise at the selection of works that were performed at the concert, with one labelling them as an “excellent choice”, and another insisting that it was “a perfect selection that sounds so amazing with his [Calleja’s] wonderful voice”. Noticeably, many drew particular attention to Shor’s work, with the contemporary composer appearing to have left his mark on the evening’s proceedings, including on the Maltese ambassador to the UAE, H.E. Maria Camilleri Calleja, who declared that “I really loved the music, and especially the piece by Alexey Shor”, as well as another audience member, who noted that the music “reminded me of childhood memories and happy events, so it was very pleasant to listen to”.

Calleja himself also hailed what he labelled as a “varied programme, full of the cavalli di battaglia of the lyrical repertoire, as well as excellent new music like Alexey Shor”.

The tenor spoke fondly of the experience of singing the diverse mix of classic and contemporary music, as well as of singing in Armenian for the first time, since his performance of Shor was then followed by a rendition of the Armenian master Alexander Spendiarian’s “Oh, Rose”. “It is a very difficult language, but one which I will use going forward, because in Maltese we have very similar sounds that allow me to give it justice”, Calleja said.

The concert then continued after a short intermission, with Smbatyan and the ASSO taking to the stage once more to play the Overture to Verdi’s “Nabucco”, after which Calleja joined them to present his interpretation of Jules Massenet’s celebrated aria “Pourquoi me réveiller” from the Opera “Werther”, Cilèa’s famous “La dolcissima effigie” from “Adriana Lecouvreur, and “E lucevan le stelle” from Giacomo Puccini’s “Tosca” to close off the evening, although the ceaseless applause of an excited audience drew the tenor out once more to perform not one, but two special encores.

Audience members were unanimous in their praise after the concert, with many lauding the orchestra, and declaring that Calleja’s voice had brought tears to their eyes with its brilliance, including the aforementioned Camilleri Calleja, who said that “it was an amazing evening, it’s so enchanting to listen to him! But I’m going to need to chide him a bit though, because he’s already ruined my makeup!”

Camilleri Calleja also spoke of the joy felt at seeing a Maltese national represent the country on the international stage in such a manner, noting that “we haven’t been to Malta in over a year, and when you see and hear such a Maltese talent, and see him representing our country as a cultural ambassador, well… what more do you want…”.

Her comments were echoed by Chris Degabriele, a Maltese national living in Dubai who often travels to attend Calleja’s concerts: “Absolutely enjoyed the programme. I’m really happy to have come here”, he said. “Joseph is really one of Malta’s best exports, and it’s just great for Malta that we have him to represent us on the international stage, not just as a singer, but also as a person”.

Degabriele also commended the organisation of the event, calling it “a great experience and a very well organised concert”, sentiments which were reiterated by the Head of the Dubai Opera, David Mansfield, who stated that “it has been wonderful to see the return of opera to Dubai. This has been a very wonderful event with an impressive international audience, and great talent on display for all of us. A truly exceptional evening! I would like to thank EUFSC once again for bringing Joseph Calleja to Dubai!”

Calleja himself also complimented the organisation and execution of the evening, as well as the work of the EUFSC and cultural entrepreneurs like Konstantin Ishkhanov, who presides over the Foundation.

“The organisation was very good”, he said. “Obviously Covid restrictions put all organisations at a big disadvantage, because you have a fewer number of people who can attend, more controls, covid tests, etc, but they did a very good job, and the cultural world takes a step for the better thanks to people like Konstantin Ishkhanov, and in fact, we need more people like this who’ll take the initiative and organise and sponsor these types of events. I don’t yet know too much about the Foundation, but they work with all the best artists working today, many of whom I know personally, and it is an honour for me to know that they think of me when setting up these types of events”.

For his part, Ishkhanov was inexorable in his praise of the tenor’s performance, declaring that “an evening like this is what we here at the EUFSC are constantly striving for. An amazing internationally-renowned talent joined by one of the top orchestras in the world at this wonderful venue. Joseph was just phenomenal tonight. We’re so proud and pleased that he accepted our invitation to attend as the festival’s Honorary Guest, and we look forward to working with him many more times in the future, for the benefit of the music world, as well as that of audiences worldwide who will get the chance to experience one of the greatest tenors of our time.”

Joseph Calleja’s performance formed part of the Symphonic Middle East festival which took place between the 17th and 22nd of June 2021. For more information about the festival, please visit the official website here.